There are five (5) members on the Board of Supervisors, each elected by citizens in the county. Individuals serve overlapping four-year terms, with elections held every two years. The Board elects one of its members annually to chair its activities.

In Guthrie County, the Board of Supervisors convenes meetings every Tuesday morning at 9:00 a.m. at the Courthouse. During budget discussions and deliberations, the Supervisors meet on Thursday mornings at 9:00 a.m. as well. Meetings are open to the public. To be placed on the Board’s weekly agenda, contact the County Auditor’s Office at (641) 747-3619 at least 24 hours in advance of the meeting. Minutes of the Board meetings are available for public viewing in the County Auditor’s office in the Courthouse or online here. 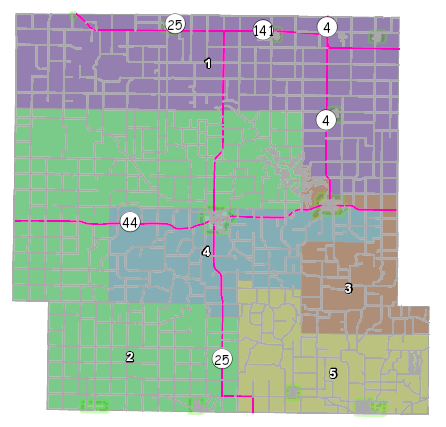 The Board of Supervisors has both legislative and administrative powers and is the policy-making body for Guthrie County government. With its authority to adopt legislation and policies for department operations, the Board sets priorities, allocates resources and maintains budgetary control.

The budget process is the most important power of the Board. By using the budget process effectively, the Board is able to monitor and correct inefficiencies in all organizational units, including elected departments, quasi-government organizations, and administrative departments. In addition to these responsibilities, the Board of Supervisors promotes and facilitates various cooperative efforts among and between other government entities and jurisdictions. Most importantly, the Board is available to its constituency and can respond to issues of importance to citizens. The Board also appoints individuals or serves on a number of Boards and Commissions that affect all aspects of Guthrie County operations.